Half Of A Yellow Sun 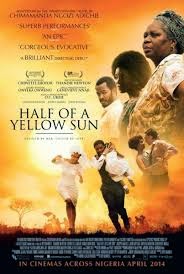 The weekend started on Friday (11th of April, 2014) for some of us who got invited to attend the film screening of Half of a Yellow Sun and, the official premiere of the movie on Saturday the 12th of April, 2014. I got to attend the film screening for the press and the press conference and both events turned out really nice. I wasn’t at the Saturday event but reports from those who attended and the pictures suggest that it was even better. The Film screening and the official premiere took place at the Silverbird cinemas in Victoria Island and the press conference held at the Wheatbaker hotel in Ikoyi.

I got to see the movie with the press people on Friday and I enjoyed it. I did anticipate the movie though since I had watched the trailer and gotten a synopsis of the movie. Besides, the cast seemed cool with Chiwetel Ejiofor who I have come to love after 12Years A Slave  and then Onyeka Onwenu whom I have not seen in a movie in almost a decade or more, in it.

The movie is an adaptation of a book written by Chimamanda Adichie, a Nigerian author whose work has transcended the shores of the nation and gone beyond, earning her a number of awards. It is centered around the political problems faced by Nigeria after its Independence in 1960, with particular emphasis on the Biafran war. However, the director, Biyi Bandele points out that the movie goes beyond the war to highlight the relationships formed and the sacrifices that were made as a result of love.
I do not want to be a spoiler so, I am not going to tell you about the movie itself but I can share some things I found out during the press conference that are not in the movie:

Here’s the official trailer of the movie.

So, get your cash ready to buy the tickets as soon as it comes out and keep visiting the blog because I just may have a goody in stock.